Aspiring educators from several universities got a taste of the transformative power of their future careers this spring. 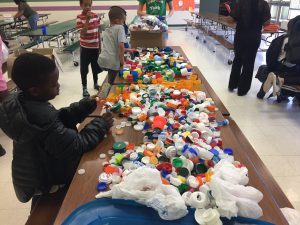 Student leaders from MEA college chapters around the state joined forces to help students at a rural elementary school in northwest Michigan turn ordinary bottle caps into a lovely sitting bench for their school campus.

“I look at bottle caps differently now,” said Rachel Evans, vice president of the Ferris State University chapter of AEM, who accumulated a large array of boxes and bags of donations in her apartment for a while – thanks to understanding roommates.

Students at the year-round elementary school in Baldwin got their first look at the caps’ new incarnation as a yellow bench with black legs during an assembly last Friday morning, where they also learned which class earned a pizza party for collecting the most donations. 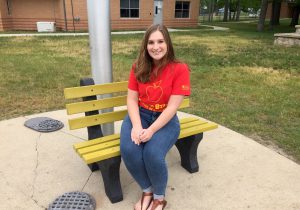 “They were so proud of what they did—it was very heartwarming,” Evans said.

After collecting bottle caps for several months, the future educators worked with second- through fourth-grade students attending an after-school program to sort the donations by size and color. The kids were rewarded with popcorn and juice.

The sorted caps were transported to Green Tree Plastics in Indiana, a manufacturing company that began doing community and school recycling projects more than a dozen years ago.

The young students learned about recycling and reuse through the project, but as importantly, “They realized by coming together and working together, they could create something out of practically nothing,” Evans said.

“We all want to be teachers, and we all want to make a difference, so being leaders in something like this shows everyone that we’re proud to be in education and we’re excited for the future,” Evans said.