Among the flood of holiday cards hitting your mailbox, you may have received an envelope from Lieutenant Governor Brian Calley about a proposal for a part-time legislature that he’s championing. 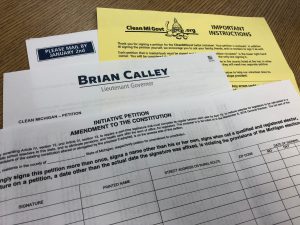 This is one holiday message you should be sure to ignore.

In an effort to jumpstart his campaign for governor, Lt. Gov. Calley has been pushing this measure for months that would restrict the legislature to meet for just 90 days prior to April 15 each year. Their latest attempt to collect the needed signatures was to mail out petitions to thousands of Michigan voters – including some MEA members.

At a glance, this measure might seem appealing to school employees who’ve been subject to years of political attacks, but this petition is a classic wolf in sheep’s clothing.  Among the reasons you should decline to sign this petition are:

These are just a few of the many reasons to NOT sign this part-time legislature petition.

Calley and his allies have sent out tens of thousands of petitions in this recent mailing, attempting to get to the number of signatures needed to qualify their measure for the ballot.  Don’t help them – Decline to Sign the Part-Time Legislature petition!