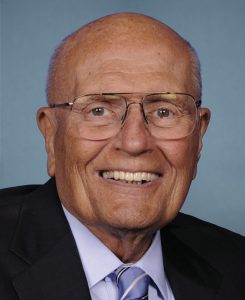 At the Representative Assembly on May 11, MEA posthumously honored Congressman John Dingell with top awards from both MEA and MEA-PAC. The following comments were delivered by MEA President Paula Herbart presenting the award, which was accepted via video by Dingell’s wife and successor in office, Congresswoman Debbie Dingell.

“The MEA-PAC Friend of Education Award is given to an outstanding legislator who has a history of continued support for education and demonstrated leadership on educational issues. And the MEA Distinguished Service Award is our union’s highest honor, bestowed to those who’ve made outstanding contributions to the cause of public education in our state and nation.

“Today marks the first time both awards are being given to the same individual at the same time.  For such a unique occasion, it is fitting that the recipient is a one-of-a-kind leader whose name is forever etched into the history of our nation. It’s my pleasure to present the MEA Distinguished Service Award and the MEA-PAC Friend of Education Award to the late Congressman John Dingell.

“Congressman Dingell holds the record for the most time as a member of Congress, representing Southeast Michigan for more than 59 years. His career on the floor of the U.S. House of Representatives marches along next to all of 20th Century history. As a Capitol page, he was in the room for President Roosevelt’s declaration of war following Pearl Harbor. Taking up the mantle of Congressman from his late father, he was sworn into office by legendary Speaker Sam Rayburn in 1955.

“During his time in Congress, his advocacy impacted a litany of life-changing legislation to pass that chamber. The Medicare Act. The Clean Water Act. The Clean Air Act. The Endangered Species Act.  The Civil Rights Act.  The Affordable Care Act. A champion of unions, of the environment, of health care, of education – including the original Elementary and Secondary Education Act in 1965.

“Even as the Dean of Congress and the power Chairman of the Energy and Commerce Committee, he always took one job most seriously of all – representing his constituents back home in Michigan. He never forgot why he was in Washington – to work to make life better for those who elected him.  And he was willing to work with anyone from either party to get that job done – a bipartisan spirit that we sorely miss in Congress today.

“Even after his retirement in 2015, he remained, as always, “The Dean” – this time of Twitter, where his intellect and wit saw him spar with our current president, 240 characters at a time, until his dying days.

“His wife – and successor in Congress – Debbie Dingell, herself a champion of public education and a true friend of MEA, was unable to be with us at the RA this weekend. But she did send a video message she asked that we share with the delegates.”