Empowering the Next Generation

An unsettling experience being trapped on an elevator in the Michigan Capitol morphed into a moment of inspiration for four Ypsilanti high school students touring the Capitol with classmates and their government teacher, a local MEA leader. 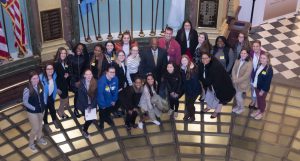 An all-female group of 23 students from Ypsilanti visited the Capitol during Lame Duck.

The Lincoln High School students were part of an all-female group observing the Legislature on Tuesday during the lame duck session. The Women’s Center of Southeast Michigan secured funding for the trip to encourage young women’s interest in politics.

Stuck on the elevator, the young women were “freaking out a little bit,” as one put it, but they stayed calm by making small talk with a few others trapped with them.  Several minutes later, the woman they were talking to revealed she had just been sworn in as a representative-elect.

“And she was a woman of color, so that was cool,” said Chantal Uzoma, a senior who said the all-day field trip made government feel more personal than simply reading about it in a textbook.

Newly elected Rep. Karen Whitsett took a selfie with the students and joked, “Could not have been trapped with a better group.” It was funny, said the Democrat elected to represent Dearborn and Detroit: “I had just gotten sworn into office and pinned. Then we got pinned in the elevator!”

The day’s other events followed the itinerary, allowing the girls to watch House action from the gallery and observe a room full of lobbyists awaiting a Senate Education Committee hearing. They met Rep. Ronnie Peterson (D-Ypsilanti) and shadowed a longtime female staffer for Sen. Rebekah Warren (D-Ann Arbor).

AP Government teacher Mike Weathers, who also serves as president of Lincoln Consolidated Education Association, said the trip was fully funded by donors to the Women’s Center who want to see a future in which the makeup of the Legislature reflects the state’s populace. 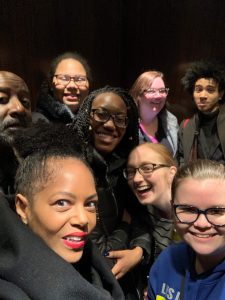 Four Ypsilanti High School students were trapped in an elevator with Representative-Elect Karen Whitsett (bottom left) during a trip to the Capitol.

“Especially this year in Michigan, where we saw a huge pink wave (election), we’re already seeing a change in that direction,” Weathers said, pointing to the election of women in the state’s top three elected posts in 2018 – governor, secretary of state, and attorney general.

The trip brought junior Chelsea Moore Currier face-to-face with her dream: “I want to be a state senator someday,” she said. “It sounds like a cliché, but I want to change things and help people get heard.”

Senior Julianna Summers-Doniver, one of the students stuck on the elevator, said she aspires to be a surgeon – not a politician – but she enjoyed taking AP Government to follow the chaotic current events in Washington, D.C. “I like hearing about it – it’s like gossip,” she said.

Aspiring high school English teacher Sophia Ross appreciated the chance to better understand government policies that might affect her when she makes the transition from student to teacher someday. MEA Lobbyist Dr. David Michelson addressed the students and answered questions.

“It’s important to know what’s happening and how things work, so we can have a voice,” she said.

Others said understanding government is simply part of being a good citizen. “A lot of us are almost old enough to vote, so it’s our civic duty,” said senior Bella Prihoda.

Weathers said the Women’s Center approached his school to offer the free trip for 23 female government students to visit the Capitol on a chartered shuttle. “It was an incredible opportunity, and I jumped at the chance.”

Applications due tomorrow for Whitmer’s Return to Learning council
May 19, 2020

On the passing of former MEA President Steven Cook
May 13, 2020
Recent Articles
Archives