Changes to evaluations and tenure in Michigan over the past several years—supposedly intended to get rid of ineffective teachers—have created a culture of fear that discourages teachers from taking risks, advocating for students, and collaborating together. 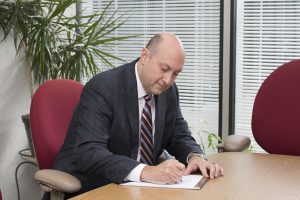 MEA General Counsel Mike Shoudy contends that some districts are using the state’s evaluation law to terminate effective teachers without due process, a violation of constitutional rights.

That is one point of consensus gleaned from thousands of MEA member responses to a survey about the evaluation system. The online MEA survey was distributed last spring, after teachers had experienced the first two years of major evaluation changes connected to an overhaul of Michigan’s Teachers’ Tenure Act.

“Imagine the stress of feeling like you need to be PERFECT all the time, because at any moment you may be observed and, if the district ties lay-offs and recalls to evaluation rankings, you could get pink-slipped just because you were a ‘3’ one day,” one survey respondent wrote.

“I’ve been in the district over 20 years,” the teacher continued. “I have never had an administrator who was unhappy with my performance, and consistently rank ‘highly effective’ on my evaluations; yet this evaluation system has had a very negative effect on my teaching… I am always on edge now.”

One-size-fits-all evaluation tools required by the state beginning in 2015 are time-consuming and cumbersome, and they don’t adequately measure good teaching, many educators say. The meaning of number scores in numerous categories is subjective.

Meanwhile “student growth” and standardized test scores will account for 40 percent of educators’ year-end evaluations beginning in 2018-19—unless MEA lobbyists succeed in their efforts to push legislation keeping the percentage at 25.

Michigan’s Republican-controlled Legislature in 2011 overhauled teacher tenure to allow more senior educators to be laid off before less experienced teachers with higher evaluation scores—a move that tips the balance of power too far in the direction of administrators, critics say.

In one egregious case of abuse of power in Allegan County, a principal was convicted of three counts of criminal sexual conduct after he demanded sexual favors from two female teachers he threatened with poor evaluations and loss of their jobs.

The two teachers eventually revealed the threats and coercion to MEA UniServ Director Christine Anderson. The principal, Jonathan Garcia, of Hillside Learning and Behavior Center, eventually admitted the conduct and was sentenced to four years in prison in August 2016.

“If the MEA hadn’t been there, they never would have told,” Anderson said.

Chipping away at teachers’ job protections discourages educators from advocating for students and challenging the status quo in their classrooms, MEA General Counsel Mike Shoudy said. Pitting teachers against each other in the evaluation process discourages collegiality in the profession, he added.

“Evaluations are supposed to be developmental. I’m concerned that some administrators are using teacher evaluations to punish rather than assist,” Shoudy said.

Shoudy often reminds members that legal representation outside of the collective bargaining agreement is only available to members that are in good standing at all stages in the process.

“It is a tremendous benefit of membership, but it is costly. We do not represent nonmembers in court actions involving evaluation, layoff, or failure to recall.”