Branwyn Jones has taught English at Michigan’s oldest community college for nearly 30 years, but it wasn’t until she and her colleagues joined MEA and negotiated their first contract that she says she earned her Ph.D.—in contract bargaining.

“We were in a bare-knuckle, bleeding brawl with our administration,” Jones said of the long negotiating process, “and as a group we were very inexperienced and naïve. If not for the unbelievable support we received from MEA’s team of experts, we never would have gotten this contract.”

Dozens of MEA members and retirees have visited with President Paula Herbart, Vice President Chandra Madafferi, and Secretary-Treasurer Brett Smith at Listening Tour events across the state as the new leadership team seeks to chart a future course with member input.

Leland teacher and association president Keven Pershinske attended the Traverse City tour stop where he discussed the uneven and inadequate funding of schools, which he said is “hurting schools, hurting kids and families, and hurting the economy.”

He said his local members are tapping a renewed sense of purpose as a teacher shortage has taken hold in Michigan. In recent years stagnating wages and lowered benefits, along with unwarranted criticism of educators, are driving people away from the profession.

“We’re energized in terms of fighting back for our younger teachers,” he said.

Being part of decision-making was the topic Glen Lake bus driver Barry Mazurek wanted to discuss in Traverse City. The president of his local transportation association said his members get frustrated when school administrators debate schedule changes without consulting drivers.

Starting the school day 15 minutes earlier might not seem a big deal to some school employees, he said, but for drivers it could be the difference between roads being plowed or snow-covered in the winter.

Thanks to his attention to lifting the voices of his fellow drivers, Mazurek maintains 100 percent membership in his unit, he said. “I tell them MEA has always got our backs.”

Communicating the true story of public education to parents and advocates is a vital role that MEA must play in pushing back against so-called “choice” policies that undermine traditional neighborhood schools by diverting tax dollars to for-profit businesses, according to Seth Furlow, a chemistry and biology teacher at Novi High School.

“We need to educate the public and expose the for-profit education system,” said Furlow, president of the Novi association, during a tour stop in Oakland County. “My neighbors wouldn’t be OK with it if they knew that their tax dollars were going to corporate bottom lines instead of their children.” 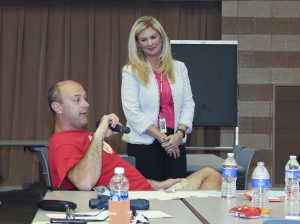 At a tour stop in Utica, the officers and members talked about what inspires them to continue doing their job despite challenges—and what educators and their union can do together to help.

UEA member Lisa DiPirro shared a story about a parent who wrote a letter 20 years ago praising DiPirro’s work improving her child’s reading skills. Recently, that student—now grown with a child of her own—caught up with her on Facebook.

“The message she sent me wasn’t about, ‘Thank you for helping me read.’ It was, ‘Thank you for believing in me and helping me feel good about myself at a time when I needed it the most.’ It reminds me how much we make a difference in the lives of our students in so many ways.”

The group also discussed frustrations with attacks on the teaching profession and the lack of respect for educators—including ways to push back when skeptics question why educators need to be compensated as professionals. They also decried the “Hunger Games” mentality bred by new evaluation systems, while recognizing that the changes MEA helped advocate for recently in state law around evaluations helped significantly.

Herbart said she’s proud to hear from members thankful for all MEA does to advocate for public education, but the new officers want to do more.

“We want to do more that really stretches what you think MEA can do—and stretches even what we think we can do,” she said.

The officers are hearing the frustrations of educators asked to do more with less—coping with large class sizes while supplying their own resources and providing their own professional development. Meanwhile, pay and benefits have slid downward in the past several years.

“We need to honor the sacred commitment that educators have kept to their students, their districts, their state and country,” Herbart said.

In addition to conducting the Listening Tour, MEA’s new officers have been criss-crossing the state attending local union meetings and school events wherever they can—logging hundreds of miles, starting even before their new jobs officially began on Sept. 1.

“It’s absolutely what I want to be doing right now,” Smith said. “I’ll go anywhere to talk with members.”