Bailey Rothe graduated from Northern Michigan University in 2017 with certification to teach English and social studies. Now she has a job—and a union family. 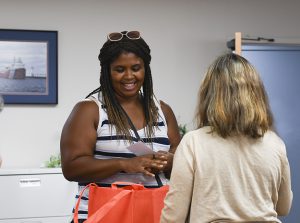 Rothe accepted a position with Lansing Public Schools in March and joined MEA for the member benefits, job protections and sense of community it provides, she says. “Lansing is such a big district, it’s nice to have a good support system. I know help is there if I need it.”

Rothe took part in a social event that brought together 500 members and their families from St. John to Holt, Okemos and Lansing. “It’s really nice seeing all these teachers with their families outside of the classroom,” she said.

Local leaders and staff from across Michigan have launched an unprecedented effort to introduce newly hired school employees and early career educators to MEA and all that a union stands for and provides.

In Okemos, the festivities for members of capitol-area locals included a bag of classroom supplies, music, face-painting, food and giveaways. “We had new people signing up just so they could attend this event,” said LSEA President Chuck Alberts.

MEA President Paula Herbart said she is seeing heightened energy at new member events she has attended this summer and fall. She tells new members that 26 years ago she was filling out a new member form and jumping into union activity.

“Fundamentally this kind of organizing is the only way that we are going to do anything that makes a difference for our students,” Herbart said, adding it develops future leaders and builds strength for advocacy.

“A change is in the air,” she said. “People want to be part of something bigger than themselves. They want to be involved with the change-makers, and the union is a change-maker. I’ve experienced it my whole career.”

In Grand Rapids, newly hired middle school teacher Erin Murphy joined the GREA at a recent orientation event. She appreciates the union’s strength in advocating for public education—which she saw firsthand in New York during a three-year teaching stint there.

“This is such a big voice in policymaking to make things better,” said Murphy, who hopes to try out leadership roles in the local association in coming years. 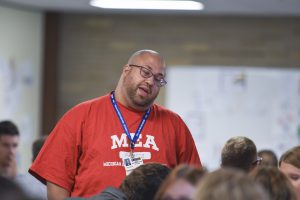 That was the point made by GREA Secretary Dan Slagter, a Grand Rapids art teacher who serves in various leadership roles at the local, county, state and national levels. Slagter told more than 90 new hires assembled for the meeting that MEA is a vehicle for making students’ lives better.

“As a union, we are the biggest collective voice out there talking about social justice and working to address the inequalities our students are facing,” he said.

MEA Vice President Chandra Madafferi said advocacy around issues is what many new educators want from MEA. “Those people who are about the cause and the profession and advocating for kids, I tell them, ‘The union was my safe place to fight for my students.’”

For others, particularly those who previously worked in low-paying, non-union charter schools, Madafferi said their interest tends to be more in the issues of compensation and working conditions.

“They have a different lens because they have had no security, no rights, so now they can step back and realize they have some protection.”

“Now it is more important than ever to organize, join together, and fight for our students, our jobs, and our public schools,” he said.

As in many school districts across the state in recent weeks, local leaders in Clarkston welcomed new employees with a luncheon that included member information packets and get-to-know-you talks with building representatives, said MEA UniServ Director Terese Fitzpatrick.

Additional plans included a meet-and-greet on opening day, a homecoming tailgate, and other get-togethers to build community and networking, in addition to ongoing conversations between veteran and newer colleagues.

In addition, leaders across the state are planning professional development for new members on topics that include evaluations, certification, financial planning, and other issues of interest to early career educators.

“We want to show folks that this is what we do—we’re here for you, and we can help in any way you need,” said Okemos Education Association President Lisa Crites.

MEA Secretary Treasurer Brett Smith said he has seen great turnout and interest in the union during his travels around the state to speak to members at orientations, social gatherings, and trainings.

“It’s powerful to bring everybody together where they can talk about common purpose and goals.”

Smith enjoys helping new and existing members understand all that the union does at the local, state and national levels. Many see the value of collective bargaining and advocacy for members at the local level, but do not know the bigger picture, he said.

“What we’re getting from people is that ‘Aha’ moment. The union is about fighting the good fight together. It’s something I truly believe in, so it’s a very easy conversation for me to have no matter where I go.”

Innovation: Place-Based Education One Chapter at a Time
December 18, 2019