More than 400 delegates to the MEA Spring Representative Assembly voted unanimously to send a Vote of No Confidence to U.S. Secretary of Education Betsy DeVos from educators in her home state. 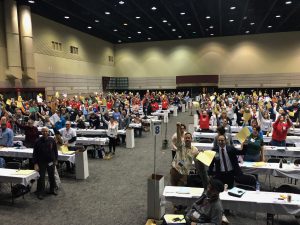 “Betsy DeVos is antithetical to everything we as educators stand for,” said Michael Adamisin, the Oak Park EA president who submitted the new business item for consideration. He previously worked at a for-profit Detroit-area charter school with greater than 50 percent annual staff turnover.

During the vote, delegates stood cheering and waving sheets of yellow paper containing the rationale for a no-confidence vote.

“Despite occupying her position for a year, recent public statements made by Mrs. DeVos have reaffirmed her gross incompetence… as well as her continued ignorance over the performance of public schools (typically strong yet underfunded) and charter or private schools (erratic with reduced accountability),” the statement said.

In other action, delegates marched anti-gun petitions to policymakers at the Capitol, passed the 2018-19 budget, eliminated the Fall RA in a cost-saving move, and consolidated a number of committees into four streamlined panels: Social Justice, Awards, Conference Planning, and Professional Development.

MEA’s recommended candidate for governor, Gretchen Whitmer, addressed the crowd wearing orange in a show of solidarity against gun violence in schools. She later walked with delegates to the Capitol as they delivered petition signatures to lawmakers.

This year is a chance for supporters of public education to set the agenda, Whitmer said. The Democratic primary is Aug. 7, and a general election win for Whitmer in November could turn the tide away from funding cuts and attacks on dedicated school employees.

“It won’t be me telling you what the education agenda should be,” she told the crowd. “It will be me listening to you advise me, so we get it right in this state for a change. Hey—how about this for a novel idea: Let’s have a governor who’s not beholden to the DeVos family.”

As Democratic leader in the state Senate, Whitmer voted against the 2010 bill that allowed the state to seize 3 percent of school employees’ paychecks for two years – a move eventually ruled unconstitutional following a lawsuit brought by MEA, AFT Michigan, and AFSCME.

“I’m pleased to say that you can all stop asking me, ‘Where’s my 3 percent?’” he told the crowd. “Let me just say I don’t think there has been a greater legal victory in MEA’s history. The results of this eight-year legal battle demonstrate the power of collective action.

“Collective action means the power to do big things – like $550 million big!” Shoudy concluded to cheers from delegates.

MEA President Paula Herbart agreed that our hope begins with our members fighting back against funding cuts and disrespect, top-down edicts and over-testing, which do nothing to improve the lives of our students.

“We can’t afford to stay silent,” she said in her address. “We can’t afford to close our classroom doors and pretend that everything will get better. We have an obligation – to our students and to our profession – to help make our collective voices heard.”

A longtime music teacher in Fraser, Herbart compared the work of MEA to the challenge of turning 75 scattered, noisy middle schoolers into a unified chorus singing beautiful music together.

“In these times, there is a lot of noise around us: chatter about winners and losers, frustrations about what we should support and whether we’ve handled everything right,” she said. “But that doesn’t get us to the music, the collaborative, collective voice of unionism – the music we make together.

“Our song of unity is what makes us stronger,” she added, pointing to this fall’s general election as the performance date. “On November 8th, we’re going to give Michigan one hell of a concert – and we’re going to keep singing until every student in our state gets the education they deserve.”