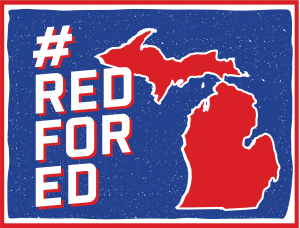 Michigan educators need to speak up – and show up – for two Capitol rallies in June, plus join local activism efforts in the meantime, Herbart told the MEA governing body. The state budget debate will be heating up in Lansing when the #RedForEd crowd shows up on June 18 and 25.

“I’m excited to announce that NEA President Lily Eskelsen García will be joining us on June 18!” Herbart said. “I know we’ll have a sea of red to welcome her to Michigan.”

RSVP for the rallies today!

In addition, grassroots work of local leaders and members will be as important as the rallies for raising awareness and building public support for significant increases in education spending after decades of neglect and disinvestment, Herbart noted.
“I’m asking all of you to hold public-facing Reality Check events as the school year comes to a close to raise the profile of funding needs with parents and the public. We must provide the public with a reality check about what’s happening in public education and why these increases are essential.”

Already MEA has distributed more than 30,000 postcards for members and the public to write their representative and senator urging support for increased education funding. Rally participants will deliver the postcards to lawmakers in June.
“We need grassroots advocates telling policymakers to make the right choices with this budget – and that work happens locally,” Herbart said.

In other action, three MEA members received the Paul Blewett Friend of Education Award for their work to help MEA and public education. The honor comes with a monetary award endowed through the trust of Blewett, a longtime educator and leader from Region 17 in the U.P. 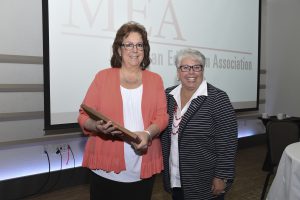 Sandy Brasil is a Novi High School administrative assistant to the principal and president of the Novi OP unit made up of secretaries and paraprofessionals. After starting her career as a part-time food service worker, Brasil evolved into a multifaceted office role with skill and kindness. A master multi-tasker, she communicates with staff, students, and parents with empathy and humor, colleagues said. “Her ability to problem solve and accommodate seemingly every need in order to keep a building of over 2,500 students, teachers, staff and administrators running as a positive smooth operating environment for teaching and learning is second to none,” wrote nominator Lee Bonner, a 20-year teacher. As a union leader, she is an advocate and ally for all, helping her members deal with many tough issues. “She is what makes our school’s atmosphere so wonderful day in and day out,” said nominator and teacher Rachel Schypinski. 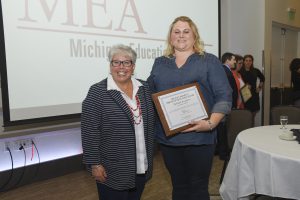 Melinda Boydston is a technology teacher at Mattawan Middle School in Plainwell and vice president of the local education association. Boydston is best known for her dedication to the Homecoming Hot Dog Sale and other fundraising efforts which provide money for several scholarships for students. In addition, she drove the development of a third-grade technology curriculum and is a voice for student and staff technology needs. She spent two summers training to deliver a middle school curriculum in computer science and app creation. As an officer in the local union and member of the negotiations committee, Boydston advocates for MEA members’ working conditions. When a colleague suffered an injury last winter, she organized a meal train and donation collection. “She takes on extra duties without hesitation and works behind the scenes, never complaining or wanting credit,” said teacher Susie Schierbeek. 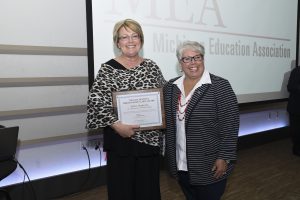 Robin Shipkosky is a math professor at Southwestern Michigan College and secretary of the local association, which organized in 2018 largely due to the efforts of Shipkosky. “Robin made the initial contacts with MEA personnel. She organized the search committee. She challenged our lead faculty to investigate the possibility of collective action,” said nominator Dr. Jeff Dennis, a social sciences professor. As secretary of the newly formed unit, she shoulders the bulk of association logistics and reporting, in addition to researching and crafting proposals for faculty health benefits. “Because of Ms. Robin Shipkosky, we now have the MEA at SMC. Because of her, we now have begun work on transforming the unwieldy top-down culture of our college. Because of her – and because of our wonderful friends within the MEA – we can be optimistic and empowered in our mission as professional teachers and academics.”

The Representative Assembly is MEA’s highest governing body which meets once a year to consider policy matters for the coming year.

Delegates also approved measures on a variety of other topics, including the establishment of a new MEA LGBTQ+ caucus; opposition to federal immigration policies about child detention and family separation;  recruitment of minorities into the education profession and unionism and associated training needs; and calls for discussions about UniServ staffing levels and improvements to the MEA.org website.