Hundreds of MEA members turned out for flashlight vigils across the state Tuesday night—on  the eve of a state Supreme Court hearing in the 3 percent court case—to shine a light on the faces of those affected by the seven-year legal battle. 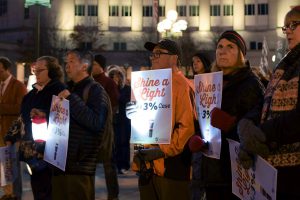 “We want to shine a light for all of the people out there who don’t even know we’ve been ripped off,” said Martha Judge, a seventh grade math and science teacher from Port Huron, who traveled two hours each way to attend a vigil in Lansing.

MEA and AFT Michigan filed suit soon after the 2010 passage of PA 75, which mandated school districts withhold 3 percent of each employee’s wages for retiree health care – a benefit they were not guaranteed to receive. The suit has prevailed in three separate lower court rulings which ordered the return of the money to school employees.

Soledad Ramirez-Heiler, a longtime Lansing ESL teacher, told a crowd of 100 assembled outside the Michigan Hall of Justice it’s only fair for school employees to get back money that was illegally taken from their paychecks from 2010-12.

The trial court and Court of Appeals agreed the law violated state and federal constitutional protections involving the taking of private property without compensation, due process, and impairment of contracts. Gov. Rick Snyder hired outside counsel at taxpayers’ expense to appeal the case for the third time in 2016.

The Supreme Court will hear oral arguments in the case this afternoon in proceedings that will be livestreamed. On Wednesday, MEA issued a press release calling for justice in the case.

“When the state passed an unconstitutional law, we filed suit on your behalf—and I want you to remember we can only do that when we act collectively and we say ‘Enough is enough,’” he told participants at the Lansing vigil.

Many of those attending Tuesday night’s events pointed out that state employees won a lawsuit over a similar law that deducted money from their paychecks to fund a separate retirement system. Those workers were refunded their confiscated money five years ago.

Educators believe the legal saga fits a larger pattern of attacks on public education in Michigan and nationwide. As cuts in school funding have reduced educator pay and benefits, more teachers are leaving the classroom and enrollment in colleges of education has plummeted.

Port Huron teacher Cheryl Stein said if things don’t get better, large numbers of teachers eligible to retire in the next few years will leave with no one to replace them.

“There’s going to be black hole, and then people will realize how much (educators) have done all these years,” Stein said.

MEA President Paula Herbart urged vigil attendees not to despair but to keep up the fight.

“We are brothers and sisters in the bond of unionism and the power of what public education does for every single child across this great state,” Herbart said. “Let’s remember that we fulfill the promise of a quality public education for every child.”