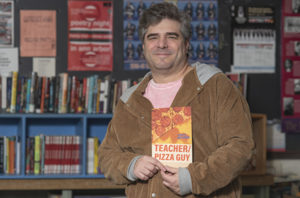 Three years ago, Ann Arbor English teacher and MEA member Jeff Kass committed to take a difficult year of working three jobs to make ends meet and turn it into art. The result was his book of poems, Teacher/Pizza Guy, published by Wayne State University Press in 2019.

Now the 23-year veteran of Pioneer High School has learned his book has been selected by the Library of Michigan as one of 20 Michigan Notable Books for 2020.

“It’s just great to realize that the art I think is interesting and worthwhile also gets recognized by other people,” Kass said of the designation announced last week. “I want this to be a story that speaks for all teachers who are struggling.”

Kass did not go into the job planning to write a book, but it became a survival strategy: “The only way I was going to be able to work on a weeknight until 3 in the morning, and get up three hours later and come to school and teach, was to create some kind of art out of the experience.”

MEA members who will be attending next week’s Winter Conference in Detroit have an opportunity to hear Kass read from the collection of poems, described as funny, relatable, and poignant, on Thursday night at 6 p.m.

The reading by Kass at Pages Bookshop, 19560 Grand River Ave. in Detroit, will include free pizza in honor of National Pizza Day.

Applications due tomorrow for Whitmer’s Return to Learning council
May 19, 2020

On the passing of former MEA President Steven Cook
May 13, 2020
Recent Articles
Archives