The 29 sixth graders filling the room were completely silent—practically motionless—as the new teacher paced in front of them. He clutched a white candle in one fist and used a lighter in his other hand to light the wick.

“Without speaking, think about what you’re seeing,” the bearded 24-year-old commanded as he held the burning candle. “Observe. What are you witnessing? Don’t say it—think it.” 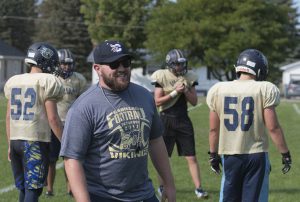 First-year teacher Zack Griffin belongs to MEA for the support system–having a group of people there to help and support him legally, mentally, and emotionally is important, he says.

He leaned forward dramatically to give students in the front a closer look. When the candle blew out, he relit it. Then he popped it in his mouth. Chewed. Swallowed. Amid gasps and shrieks, he opened his mouth and wiggled his tongue to show the object was gone.

In the first week of his first year as a permanent teacher at Mackinaw Trail Middle School in Cadillac, the sixth-grade science teacher began laying a foundation. He knows what he wants to build—kids who love school, motivated students who grow and discover, and something else:

His reputation for having so much fun that kids don’t realize they’re learning.

“I just get so fired up doing what I do that I’ll be known as the crazy science teacher,” he said. “I want them beating down the doors to get in and get to work.”

That is not to say he’s a pushover. After school, he assumes his other persona—offensive and defensive line coach for the Cadillac High School varsity football team—where he barks directions at his players running drills and reading plays.

It’s tough coaching football in the first year of teaching, but he didn’t get the extra work because he’s low man on the totem pole. This is Griffin’s dream job. He’s a football true believer, who doesn’t see a line of demarcation between the classroom and the athletic field.

He grew up in Reed City about 25 miles from where he’s now teaching, a multi-sport athlete who started at age nine as a water boy for the high school football team led by Coach Monty Price, a man he would later play for, whom he considers a second father.

“I learned so much from him—a lot about football but a lot about what it takes to be successful—that no matter what you do, you never stop working.”

Griffin played football at Alma College after graduating high school but transferred for his sophomore year to Ferris State University to save money. Even so he’s carrying more than $30,000 in student loan debt.

Griffin always loved science and pursued other college majors before earning a Bachelor’s degree in Elementary Education with certification in 6-8 science, finishing in 6½ years.

Both of Griffin’s parents are educators—his dad is technology director in Reed City Area Public Schools, and his mom is assistant principal and athletic director at the high school. Although they work long hours, his parents inspired him with their commitment to public education.

His parents, teachers, college professors warned him about a teaching career: “They said, ‘You’re going to work ungodly hours. You’re going to be under-appreciated and underpaid.’”

He also was aware of concerns about top-down policymaking from politicians in Lansing, particularly the over-emphasis on standardized test results that can drain joy from the classroom and obscure the true picture of teaching and learning.

That’s why he’s so happy to be working in Cadillac Area Public Schools, where the priority district-wide is student engagement—not the pursuit of one test score. The focus frees Griffin to concentrate on the totality of students as human beings, he said.

The science curriculum stresses hands-on learning, collaboration, and discovery—all in keeping with his focus on hard work and improvement: “I’ve been stressing that to my kids; we’re going to become better people. The most important thing is to have a growth mindset.”

Opening students’ minds was the point of the candle demonstration he ran in that early day of the year. The white candle was actually string cheese, and the wick was an almond sliver. His point? Observe carefully, like a scientist. Use all of your senses. Things aren’t always what they seem.

When kids veer toward over-excitement in class, Griffin uses tried-and-true methods to signal them: standing in close proximity, inserting the student’s name into a sentence, directing a teacher “look” their way (which he has practiced in the mirror).

He tries to use “the path of least resistance” in redirecting student behavior, he said. He’s a huge music fan and keeps tunes playing while kids walk in to class, varying the genres from indy to pop and even swing—sometimes dancing. He hopes students will follow his lead.

Last year, he experienced a trial-by-fire that tested his philosophy. He was hired at an area district mid-year as a long-term sub in a challenging third grade classroom that had been through a series of teachers. An administrator told him, “If you can stick with this class and make a difference, you can probably handle any situation.”

The work was exhausting. Four of the 18 children were at grade level in any subject. Nearly 90 percent of students at the school lived in poverty. He worried they didn’t have a stable home, food or heat in the winter. “My sleep was definitely rough during that whole time,” he said.

What kept him coming back for four months was support from the administration, he said. Extra paraprofessionals were assigned to help, and Title I resources were steered his way. Ultimately, the students showed growth on NWEA post-testing.

“I must have done something worth a little bit if they made progress,” he said. “That’s why I like the growth aspect of everything. They have to learn how to learn.”

Now Griffin has set himself a lofty goal for his first year in a permanent job. He wants to meet the needs of all of his students, not just most. But day-to-day he stays focused on one thing: “If they don’t take anything else home from a lesson, I want them to have fun.”

Fun is a word he says often, because he’s having a blast, too.

“It’s awesome. I get to have a direct impact on the future by helping to shape people. It’s true that you don’t remember what you learned in sixth-grade science when you’re 35, but you might remember—hey, that teacher cared about me and wanted me to become a better person.”